Felix Dexter was the real McCoy, but our comedians have been blacked out of TV

he BBC pays tribute to this great talent – but black comedy shows, in which he made his name, have been wiped off the schedules 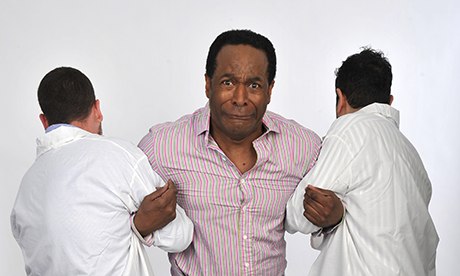 Felix Dexter, who died from multiple myeloma last month, was a star of The Real McCoy and Citizen Khan, ‘but he will ultimately go down as a great unfulfilled talent’.Photograph: Steve Ullathorne

I last saw Felix Dexter in the hospice. Even though he was in huge pain and could not walk, he still had a mischievous smile. He said there was room for me and it was rent-free with great views. He told me he was still writing stuff and couldn’t wait to try it out. Sadly we will never hear it, as on 18 October Felix lost his three-year battle with multiple myeloma. It came as a huge shock to many – and that he was on TV at the time, in the BBC1 comedy Citizen Khan, made it all the more poignant.

I had worked with Flick (as I called him) on the BBC2 comedy sketch show The Real McCoy for three years during the mid-90s. He was very different to the rest of the cast. While we were busily getting dressed up, playing lots of characters and arguing about the content of the show, Felix just played one character per episode. As you can imagine there were a few grumbles. This guy comes in and takes up seven of a 30-minute show and leaves us the crumbs.

But they were a magnificent seven minutes. There was Douglas who wanted to be white; the jobsworth ticket inspector who hated letting anyone on the train; and, most famously, Nathaniel the Nigerian student working at the local cab office. It was groundbreaking, and the characters and the show became cult.

Tragic, then, that none of the terrestrial channels could find a way to harness that awesome improvisational talent in his own series. On Sunday, BBC2 is screening a tribute to Felix Dexter’s work. However, though he filled many a theatre, he will ultimately go down as a great unfulfilled talent. His comedy transcended race – both black and white found him hilarious. But it appears that all the execs could see was a black man.

Though there were many pilots done with a number of the Real McCoy cast – and there were hits for our Asian cast members such as Goodness Gracious Me and The Kumars at No 42 – nothing materialised for the black comics.

At one time, after 70s and 80s shows such as Empire Road, The Fosters Mixed Blessings and No Problem!, the future seemed bright for black comedy on TV. Channel 4 was a new broadcaster promising diverse programming: Desmond’s is still its most successful homegrown comedy.

But then TV executives’ thinking about black programming changed. All the black departments closed and special commissioning halted. I remember one exec telling me it was no longer right to commission a black show; new thinking meant that everything was integrated. We could now see a black family in EastEnders, Emmerdale and even Coronation Street. Black people were now in the mainstream … Hurrah!

Sadly, 18 years after finishing The Real McCoy, things are worse than they have ever been. There has been a longstanding joke among black comedians that no one else will get a break until Lenny Henry dies. Comic Gina Yashere, for example, left the UK to join the hordes of other black performers in the US.

If I had a pound for every time I get asked when The Real McCoy is coming back I would be rich. That is a terrible indictment of where we are. Even the young white producer of my radio show told me she and her brother watched it every week. It wasn’t just a black comedy.

What is it that editors cannot see? Is it the same thing which means that black actors such as Lenny James, David Harewood and Idris Elba have to make it big in the US before they are invited back to star in a UK television series? Chuka Umunna, the shadow business secretary, raised this himself in a speech last month: “Why do so many black British actors have to leave the UK for the US to get decent film and television roles that fall outside the stereotypes? … That is unacceptable and has got to change.”

There are new and talented comedians of colour filling venues like the Hackney Empire and even the O2 at Greenwich but they cannot get on TV. I believe that, increasingly, TV and comedy itself will be the loser with more black talent choosing to go abroad.

Want to know what black comedy is? Well, Felix told me that when his ex-girlfriends (who were looking after him in the hospice) ever raised an uncomfortable issue, he would scream in agony to divert the conversation. That is how I remember Flick. The man who, even in extreme pain and facing death, could still make tears of joy run down my face. That is black comedy: no, actually, that is just funny.