if you take the time to look up said word, you will notice it does not accompany a picture of me, nor does it state I am in any way, shape or form related to said word…

so lest we not refer to me in such a way, nor tell me how I’m fatter tun I used to be, or how the  television makes me look slimmer and taller but less FATTTTTTTTTTTTTT……

moving swiftly on at a pace faster than a speeding bullet!

faster than the fastest human on the planet!

even faster than Eddie BBC Nestor’s mout on his drive time show every day….

Ladies n Gentlemen,  I give you my word, contrary to popular belief i was NOT asked to enter this years “I’m a Celebrity Jungle”, an i also DID NOT refuse due to medical grounds of me being allergic to tree bark, an suffering from prickly heat and sweat rash around my nipples….

it was of course due to the fee that was being offered an put on the table….an for the record, i don’t get outta bed for less than £3.59 per day (happy meal @ mcd’s)….

now not only were they offering less than that, they insulted me further by suggesting that they’d make up the deficit with a years supply of ostrich foot or antelope penis..

an to all those who just want to come down to support the cause or participate in the worlds biggest ‘Candy’ dance experience…. even if you’ve lived on planet Zork for the past 30 years, an don’t know the moves, myself an mr BBC himself wid sandwich you between us an guide you through every step of the way….

we are going to have Fun Fun FUNNNNNNNNNN….. and then more fun…

from 11.30 am till 3.30pm, we got gym classes for every single person, shape, age and form…. even people like myself an mr BBC (Short, Big Boned and Hairy peeps) will slip in unnoticed an be comfortable with everything… so, there’s no excuse now is there, especially if you want to witness me participating in my leg warmers, sweat bands, 1 piece Lycra suit (bum belt accessory also included) Mr Motivator ain’t got nothing on me….

so my people of the world, get your trainers on, your water bottles filled, an your underarm antiperspirant handy, cos we gonna sweat like we’re related to Lee Evans…. and remember don’t forget to tell your friends and families to come on down to University of London……

remember every single £ goes to charity….

We finished recording the Real McCoy in 1995 and if I had a £1 for every time I have been asked “When is it coming back”? I would be a very rich man.

Since Robbie Gee and I announced our intention to be part of a team that aims to climb Africa’s highest mountain for charity in July next year that question has now stopped. It has been replaced with one I find equally difficult to answer. When is Rob going to start training? I am not sure why they are not asking him. In fact I got so fed up with said question that I shouted “Why are you bleeping asking me? The reply was interesting. “Cos he is so bleeping fat”……

What do you say to that? I didn’t say anything, in fact I just nodded and grinned.

You see next year (2015) will mark our 25th anniversary. We have had many highs and a few lows in that time (promise to tell you about some of them during these blogs) Anyway as I was saying next year will make 25 years working as a duo. (Geez I been with him longer than my wife) And for 24 of those years he has described me as the short, fat, hairy one. I am still short, though I am looking for special shoes and I am still hairy, though not as hairy as one of my wife’s aunts. But [and here is the thing] he can no longer call me fat because he has turned into the Honey Monster, complete with moobs. His idea of healthy eating is lettuce with his BIG MAC. He tells people he is bulking up for his new film and I tell them it’s as a Sumo Wrestler. For some reason he is the only person who doesn’t find it funny.

We raised £640 with the help of Gino, the teddy bear. Talking of bears. It is NOT me in the Paddington Bear trailer, so stop asking me for tickets. Anyway back to the quiz. A special congrats to Fried Onion Rings who beat the Urban Synergy Village to win the medals courtesy of James Shoe Care of Barkingside. We all had so much fun, I think we will do it annually for different charities. 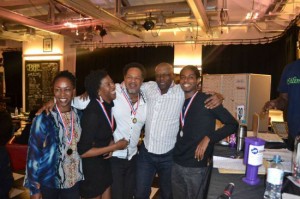 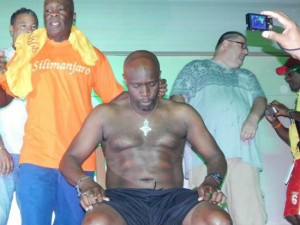 Ladies and Gentlemen may I have your attention please….
welcome to the ‘Team GeeStor’ camp…
the gloves are on, the fighters are ready an prepared, an the bell has at last been sounded… IT’s SHOWTIME!!!!!!!!!!!!!!!!!
In the Red corner, we have Mr Edward ‘BBC’ Nestor…. he hails from outta Hackney, he supports the mighty Man Utd, an he is currently weighing in at just under 13stone, and standing 4 foot 8.5 inches tall (that’s on a ladder though)…
and in the Blue corner, we have Mr Robbie ‘Tighter Than Tight’ Gee… he hails from outta Souf London, knows the alphabet backwards, an weighs in at Fat, Fat Fatter Than (OMG he bruk the scales) FAT…..
ok, ok, ok, enough talking….LETS GET READY TO RUMBLEEEEEEEEEEEEEE….
let battle commence…….

Yes, I know, I’m confusing you all… so let me set the record straight my people…
Eddie Nestor & Robbie Gee, are about to embark on a journey taking on their biggest EVER battle, an their best ever roles…
Forget their past roles in Desmond’s, Casualty, Real McCoy, Trainspotting, Snatch, Pirates of the Caribbean and the rest, they’ve now decided to do what the real
9-2-5 population do on a daily basis and ‘really’ challenge themselves…
Yep, they’ve decided to scale 1 of the highest mountains in the world..
‘Mount Kilimanjaro’
oooooooohhhhhhhhhhhhh yeah….. 6 days going up an 4 days coming down….
an regardless of what you’ve heard in the past, or read in the news…
Robbie will NOT be carrying Eddie’s bags for him, just to see what it’s like to hold a ickle lickle bag, made by the same people who make bags for ‘Action Man’…..
(come on though, Eddie is short though innit, bout he’s 5 foot 10 inches…
he still writes to Santa Claus wishing to be taller every Christmas…

Yes that’s right, on July 3rd 2015…
Eddie, Robbie, their wife, their manager and their trainer will attempt this hummungus fete of climbing Africa’s tallest mountain an in doing so, raising £100’000 for 4 great charities….
can I get a whooooooooooooop whooooooooooooooooooo…..
we will be hosting shows, putting on events, spreading the word and taking on various challenges from now till then, but basically just doing a whole heep of things to accomplish 1) the raising of £100’000 an 2) getting fit in order to go up the mountain trim, lean, happy and smiling an then to ‘not’ come down a week later without the other….
(trus me, I myself am gonna make it but I can’t say the same for the lickle shart guy)
So, the first thing we did was have a charity 5-a-side tournament last weekend @ London SoccerDome an managed to raise a whopping £550….
now apart from the fact that Eddie can’t walk an has had to take a cab to an from work every day since participating, it really was a great day an fun was had by all…
i wouldn’t have minded if he actually played in the matches, but all he did was carry the bag with the whistle an the match ball in….
an he said he pulled his asparagus…. well, that’s what it sounded like he said.
anyway, thanks to all who took part, to those who just came to support, to the workers who gave their time freely, an of course, big shout out goes to the winning team ‘Goldsmiths’ who won the trophy plus individual personal medals (all courtesy of James Shoe Care in Barkingside)
Listen out for our next venture an please please PLEASE remember, every singe £ raised goes to charity….. 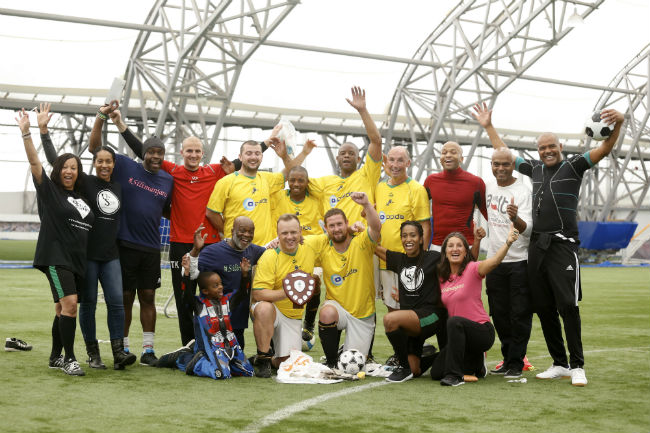