Friends have paid tribute to Felix Dexter, who died on Friday.

The comedian and actor had suffered from myeloma, a type of bone marrow cancer. Reports said he was 52.

He came to prominence in the flagship black comedy The Real McCoy and later performed for a season with the Royal Shakespeare Company.

Fellow comedian Sean Hughes wrote on Twitter: “So so sad to hear about the truly wonderful Felix Dexter passing away.

“I hope you can feel the love in the comedy community fella. Rip.”

Once named Time Out comedian of the year, Dexter also featured in iconic BBC comedies The Fast Show and Absolutely Fabulous.

More recently, he played three of the main roles in BBC Two’s sketch show Bellamy’s People and is currently appearing in Citizen Khan.

His close friend, BBC Radio London presenter Eddie Nestor – who acted alongside Dexter for three years in The Real McCoy – told BBC Radio 5 Live: “It’s a sad day. It’s a really sad day. I went to see him and we talked and we laughed, and we laughed really hard. 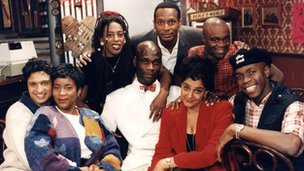 He first came to prominence in The Real McCoy

“This is somebody who’s been diagnosed with a terminal illness and you find yourself laughing really hard, belly laughs.”

He added: “We’ve lost a talented, intelligent, articulate performer who could touch – who could reach out.”

Whitehouse told BBC Radio 5 live he was privileged to be close to the comedian and actor.

“He was a very modest, a very private man,” he said.

“It was an honour to be close to him.

“He stuck in people’s minds, Felix. There’s been such an outpouring of warmth and affection for him.”

Before entering comedy, Dexter studied law – something he said helped him deal with hecklers.

He named Billy Connolly and the late American comics Richard Pryor and Bill Hicks among his influences, and remained on the stand-up circuit throughout his career.

Later he featured in long-running staples Have I Got News For You and Grumpy Old Men, as well as the influential Knowing Me Knowing You with Alan Partridge.

As an actor, he had parts in Casualty and The Bill and appeared in the West End alongside Christian Slater.